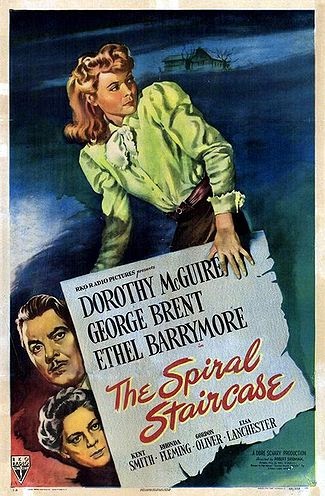 A High-Concept film avant la lettre. There’s a serial killer on the loose in a small New England town early into the 20th-Century. The killer generally chooses women with some kind of imperfection, and our heroine, Dorothy McGuire, a maid who works in a mansion for a rich family, is mute. The film delights with every Gothic thriller cliché in the book: an orphaned heroine in an overstuffed mansion full of spiral staircases and dark corners, a Freudian explanation to McGuire’s muteness, music that positively telegraphs what you’re meant to feel, a portentous Surreal dream sequence, a camera that takes you right into the killer’s eye but not quite into his mind(at least until the end),  a McGuffin, candle-lights that blow out, streaming wind, pouring rain, dark cellars, and a narrative that keeps taking you down false-corridors but never quite cheats. The question is not whether the killer will get the star; nobody kills the star in a big-budget studio film in 1945 Hollywood.  Instead the film taunts and teases us to wonder who the killer might be and when exactly the star will scream.

The cast is quite good if not quite top grade (Dorothy McGuire and George Brent instead of, say, Ingrid Bergman and Charles Boyer). McGuire is effective if a bit out of her league; Brent is Brent no matter what league he’s in; and there’s a reason we no longer remember Kent Smith and Gordon Oliver, even after playing   important roles such as here. The rest of the supporting cast, however, is a film buff’s delight (Elsa Lanchester as the scullery maid that likes her nip of brandy, Ethel Barrymore as a bed-ridden matron who’s handy with a gun; Rhonda Fleming, before she became the Technicolor hottie with the flaming red hair in low-budget spectacles, as, I kid you not, a secretary).

The real star, however, is director Robert Siodmak: his camera movements alone are a thrill to see; they creep, glide, close in, pay attention, sweep, peek, penetrate; all in wonderful compositions that will elicit awe and joy in those who can appreciate them. Nicholas Musuruca, who was also dop on Cat People (Jacques Tourneur, USA, 1942) and Out of the Past (Tourneur again, USA, 1947), produces wonderful work on camera here as well. A classic which perhaps has been slightly overlooked because it begs comparison with Hitchock’s work, indeed solicits it, his influence is everywhere evident here, and slightly falls short.

It’s worth noting here that I paid £7.40 to see it at the Electric Cinema in Birmingham where they showed it in what seemed a not-very-good DVD and had to be told-off by me because they were showing it in the wrong ratio.

It might also be worth noting that when the cinema is very dark (as it should be and as the Electric was) when sparse, high contrast, quasi-noir lighting like this goes very dark, as the eye focuses on the source of light, the image seems to expand into wide-screen. I wonder if this is just my own personal perception or if the experience is more widespread.