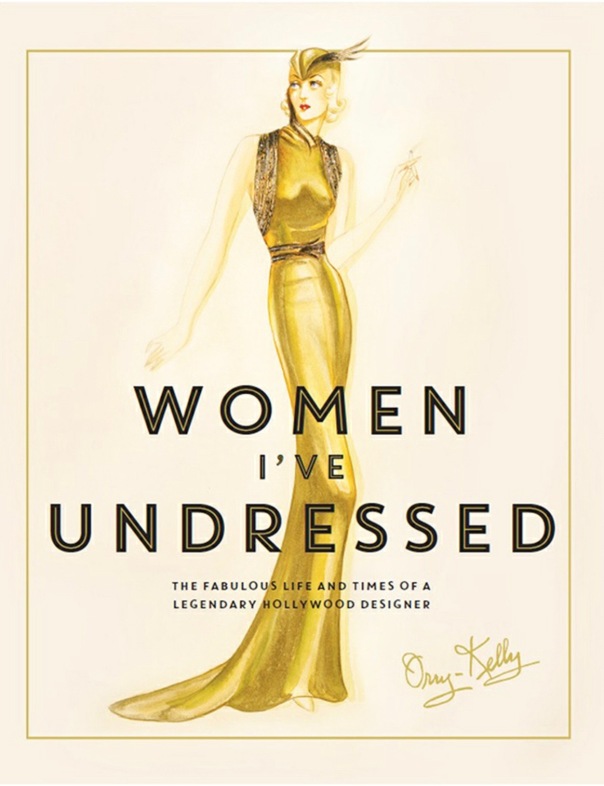 Orry-Kelly was a bachelor all his life; he was chief costume designer for Warner Brothers between 1932 and 1944;  lived with Cary Grant in the late Twenties and was furious when Grant moved on to Randolph Scott in the Thirties; was bestie to Texas Guinan, Ethel Barrymore, Marion Davies, Fanny Brice, Hedda Hopper and other formidable women; and oh did he love his mom. But it was only upon finishing the book proper and reading Catherine Martin’s Foreword and Gillian Armstrong’s Afterword to Women I’ve Undressed that I could be sure he was gay.

Gilliam Armstrong, the superb Australian director of Mrs. Soffel (1984), Starstruck (1982) and many other films that deserve to be classics (Little Women, 1994), had made a documentary on Orry-Kelly called Women He’s Undressed (2015). Orry-Kelly, born in Kiama, New South Wales, Australia and winner of three Academy Awards for costume design, was internationally one of the most famous Australians of the first half of the twentieth century — his billing in Australia often read ‘costumes by our Orry-Kelly’ — and of clear interest to an Australian filmmaker and an Australian audience (and beyond). It was amidst the publicity surrounding the release of the film that the memoir came to light. As Armstrong recounts, ‘ I mentioned Orry in an interview on a Newcastle radio station and a friend of Orry’s grand-niece contacted me, wondering if I’d be interested in meeting his niece who, by the way, had his memoir! She had been keeping Orry’s memoirs in a pillowslip in her laundry cupboard for her mother for over 30 years.’

The main reason for reading this book is because Orry-Kelly remains one of the outstanding costume designers of the classic era: when you visualise the Busby Berkeley musicals, or Warners gangster films or Bette Davis at her peak or Ingrid Bergman in Casablanca, you’re re-invoking the dreams, characters and stories that Orry-Kelly helped to create. Only Adrian, Travis Banton, Edith Head and Irene could be considered peers in Hollywood’s classic era. Plus, after his Warner’s period, he designed the costumes for An American in Paris (Minnelli, 1951), Auntie Mame (Morton D’Acosta, 1958), Some Like it Hot (Billy Wilder, 1959) and many other classics. As Catherine Martin, the costume designer who in 1994 finally superseded Orry-Kelly as the Australian to win most Academy Awards notes, his influence continues to be felt, beginning with the impact his work had on hers, and illustrating it with a comparison between the costumes Orry-Kelly designed for Bette Davis in Now, Voyager (Irving Rapper, 1942) and what she herself designed for Nicole Kidman in Australia (Baz Luhrman, 2008).

Orry Kelly wrote the book for an audience of the time after his peak (the late fifties, early sixties) but not quite yet for publication so it’s full of all kinds of obfuscation that act as a kind of discretion (what kinds of crushes where those that Cary Grant had on all those women; were they akin to those I have when I meet a new friend — a kind of romantic idealisation of who they are – or was it sexual. It’s not clear) and all kinds of indiscretions that would never have made print had the book been published in his lifetime (Errol Flynn’s drug consumption, Joan Fontaine’s imperious demands, Monroe’s exhibitionism in Some Like It Hot). The book is full of superb anecdotes: Flynn explaining that he hadn’t stolen that emerald necklace in Sidney – it had been a gift; Fanny Brice eagerly watching and dissecting Bette Davis’ performances like the true fan she was; Katharine Hepburn ensuring that Ethel Barrymore regularly received fresh flowers in her last years…an many more.

The book offers a wonderful evocation of lost worlds: Bohemian Sidney post WW1; the underworldly New York of gangsters and speakeasys. These raffish milieus take on an even brighter sheen if, to borrow Alexander Doty’s phrase, one makes things perfectly queer; that is to say not only a personal and subjective reading but one informed by a knowledge and understanding of gay cultures and identities in the first half of the twentieth century, an important if rarely valued kind of cultural capital. Read through a ‘gay lens’, those milieus where prostitutes and petty criminals intersected with show business are not only where Orry-Kelly got his start designing but also those that intersected with homosexual sub-cultures; the rage and hurt expressed by all the bitchy attacks on Cary Grant become those of a deserted lover rather than merely an ungrateful room-mate; the love for the nightlife of Hollywood and Vine becomes textured with sexuality; the friendships with George Cukor, Cole Porter, and Somerset Maugham, a network of middle-aged homosexuals gallantly staving off the worst ravages of middle-aged spinsterdom.

I’m not sure that the book is doubly inflected in the way that Harry Louis Gates Jr. indicates in Blues, Ideology and African American Literature: A Vernacular Theory, where he writes of black performers putting on blackface to perform minstrelsy but doing so in such a way that white audiences remained unaware and understood it one way whilst black audiences understood that it was a black person performing and understood it another. Did Orry-Kelly doubly-inflect it that way so that his gay friends and contemporaries understood a layer of meaning unavailable to other audiences? I’m not sure. Can it be read to bring out this double (at least!) inflection? Without a doubt and to great pleasure and advantage.

It’s a fascinating book; I now look forward to the film.