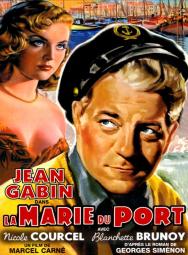 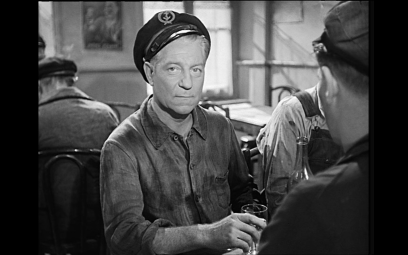 Gabin as he is in La Marie du Port (right), and the much more youthful portrait the poster advertises (left). The image the poster sells harks back to his thirties films, perhaps hoping to appeal to his pre-war popularity and regain it. But it´s also an image that somewhat contradicts one of the film´s main themes, which is about inter-generational love. The film itself I´ve now seen twice and it gets better each time: 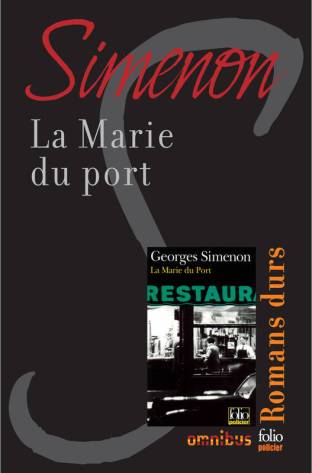 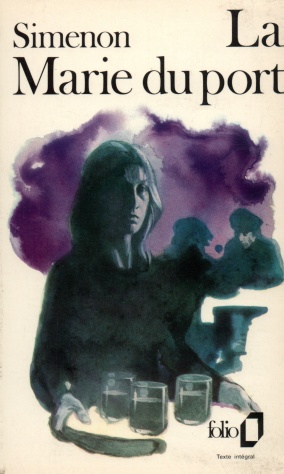 The film is based on the novel by Georges Simenon (see above) and tells the story of Henri Châtelard (Jean Gabin), a well-to-do owner of a restaurant and cinema in Cherbourg, the biggest town in the region, who accompanies his mistress Odile (Blanchette Brunoy) to her father´s funeral in the small village of Port-en-Bessin in Normandy, only to fall in love with her sister, Marie (Nicole Courcel).  There are several obstacles to the union of Châtelard and Marie: Marie is seeing a young local boy Marcel (Claude Romain), crazy in love with her and threatening suicide; she´s Odile´s sister; there´s a considerable difference in age (one of the things the poster for the film is trying to obscure); Marie doesn´t want to be a mistress like her sister, living the good life but shunned by ´respectable’ people — she wants a ring.

At the beginning of the film Henri and Odile are driving to the funeral of Odile´s father. They get a puncture and arrive late. These first few scenes paint a powerful picture of small town life and mentality. The house is so small, mourners and well-wishers remain outside, on the street. Inside, Marie is feeding the family. Odile and Marie have three younger siblings, which now have to be distributed amongst the aunts and uncles to be brought up. We get a sense of a subsistence culture –whether the children can earn their keep is part of the discussion of how and to whom they will be distributed –and that  children will most likely be used as slave labour until they come of age. Odile has escaped this by becoming Châtelard´s mistress. But at a price. She doesn´t really love him, or at least no longer. She´s stuck in Cherbourg where she really want to be in Paris. And she´s being shunned by the village folk she grew up with. Carné well indicates the community´s opprobium towards her by the expression in some of the mourner´s faces as she arrives to her father´s house (below right), something that reminded me of the scene with the nuns at the hospital in Almodóvar´s  Live Flesh (below right) and how a series of expressions can not only evoke character but a whole structure of feeling. 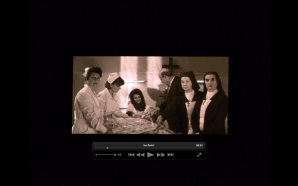 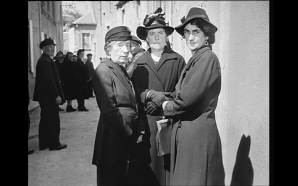 Marie is hard-working, dour, conscientious, honest, and Châtelard is smitten from the first moment he sees her (below left), an image significantly rhymed the first time Marcel sees her with Châtelard: interestingly, one is on the inside looking out, the other outside looking in. 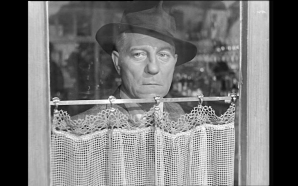 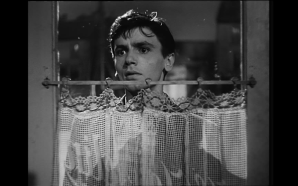 Carné surrounds himself and this production with some of the greatest talents the French cinema of the period had to offer: Jacques Prévert worked on the screenplay (Louis Chavance and Geroges Ribemont-Dessaignes are the writers credited); there is beautiful work by Herni Alekan as cinematographer, the legendary Alexandre Trauner is with Auguste Capelier credited for the production design. And the way Carne orchestrates the various elements they contribute tells you all the story you need to know and more, as you can see in the lovely image below, where Claude, in the image that follows the one above right, sees Châtelard and Marie, clearly in love because, as you can see below, in that busy café, surrounded by people, and with Marcel´s own father propped at the bar anticipating the scene to come, the light seems to envelop them alone, a couple, even if they themselves don´t yet know it. 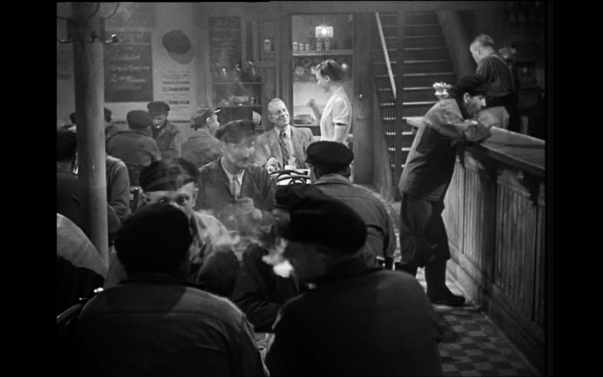 One of the things that´s striking about the film is the presentation of a freewheeling, guilt-free, pragmatic and easy sex-life to almost all of its characters. Marie and Marcel are the exceptions: she too puritanical and serious, he over-excited and dangerously romantic. But they´re young and they will learn.

The clip above is preceded by a scene in which a party leaves Châtelard´s restaurant because their table has been handed over to the local football team who´ve just won a match. The party leave in a huff except for the young woman who goest to the cinema next door. Châtelard has gone there too to eat his lunch and get some peace and quiet. But before the newsreel is over, they´ve agreed to spend the night together. It´s a scene that luxuriates in the cinema itself,  letting us see it in wide shots, with the projector throwing a beam of light in the darkness, and the screen itself creating a glow in the space. Note the partial lighting of the characters, allowing us to see their expressions but evoking the covert by the surrounding darkness. Note too the adventurous (at sea) playful (the cat), the structured (army manouvres) the explosive (the guns going off), and the brief that´s indicated in the newsreel being shown but that is also commenting on the action we see.

Another scene that I also found unusual in its attitude to sex is the one where Châtelard and Marie, find Odile (Châtelard´s mistress and Marie´s sister) in bed with Marcel (Marie´s boyfriend).  Marie and Châtelard have had a fight, he goes to find Marcel and when he opens the door he sees Odile and Marcel in bed together. Instead of being angry he finds it a joke, laughs, and won´t hold it against them later. It´s a scene unimaginable in American cinema of the period.

What I also found intriguing about the scene is that we´re shown the action through a relay of close-ups that indicate each of the principals´reaction but tellingly we´re never shown a two-shot or a medium shot in which Odile and Marcel are in the frame together, as if the idea really is too incongruous. 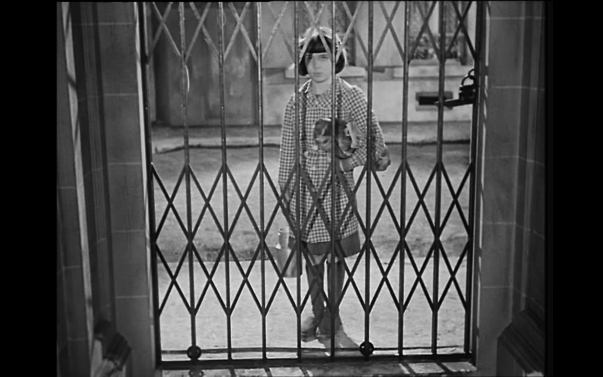 When Marie descends the stairs it´s photographed so as to evoke a feeling of hopes plummeting. But it´s not what Châtelard suspects: ‘If you only knew how little I care  about Marcel, even if he is with someone else, and even if it´s with my sister’. When Marie admits that she had really come for him, that she hadn´t wanted to say it but it´s true, the camera pans to a little girl, dressed poorly, with a milk can on one hand and a loaf of bread under her other arm,  behind a barred and locked gate that casts shadows inside (Châtelard here calls his house a cage). On one level the little girl is there as a narrative device to demonstrate the intrusion of the public on a private and sentimental moment. On a more metaphoric level, it´s clearly a commentary on Marie herself. But what exactly? It´s a moment that´s given considerable weight. It comes just after Châtelard says ‘Oh, so it´s for me that you´ve come’, at which point Châtelard looks left, and a pan follows his gaze to show us the little girl. Does that mean that there will be another young woman after Marie? Is it meant to signify a younger Marie. And does it mean that her choosing to go with Châtelard will be a kind of prison? I´m not sure but it´s an image that raises these and more questions and thus lingers in the mind (see above).

Carné is clearly in love with cinema and the cinema setting allows him to express it to us. Gabin is filmed against cannisters in his office, we see the projection system, posters, the cinema itself and clips from several films. The cinema also affords a nice contrast to the life and world Marie comes from.

La Marie du Port has two scenes set in Châtelard´s cinema. The first is the easy pick-up I discussed earlier on. The second takes place amidst a screening of F.W Murnau´s Tabu. Châtelard speaks of getting old, of time passing. Odile is off to Paris. Marcel to the cruise ships to become a lady´s hairdresser. Maybe he too will go away, in that boat he´s been fixing in the village. Besides one isn´t alone when one travels he muses. Marie comments that he doesn´t have to be alone. But he replies that, as she can see in the film,  there are girls in every port, ones that don´t impose conditions: rings, marriage. This is an interesting rhyming scene with the first scene in the cinema: the newsreel, vs Murnau´s romantic and luscious Tabu; they´re alone instead of part of the crowd as in the earlier scene, and more importantly, Marie walks out on him. She´s not that kind of girl. And he will chase after her, offer her the keys to his business, and make jokes about how at the wedding he´ll tell the officals she´s his daughter doing her first communion. 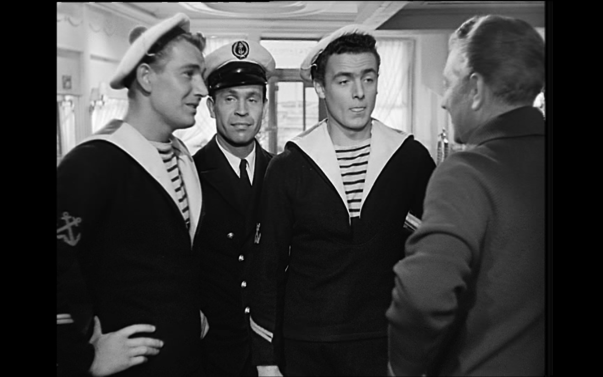 Seeing  La Marie du port again I was struck by how queer it seems to me now and not just becaause Carné was gay and he met his long term partner Roland Lessaffre , the sailor next to Gabin above, on the film : Chatelard, unmarried in his fifties, the open relationship he´s established with Odile, the easy pickups in cinemas, the older/younger pairings and the switch the narrative delivers, the dream of escape to the big city, the dream to be a lady´s hairdresser, the homage to Murnau, the identification with the prostitutes and the lowlife, the handsome sailors, the hypersensitive youth who attempts suicide. It evokes a ´structure of feeling´´or a ´’gay sensibility´of another time without anything being mentioned. I read the book yesterday to see if it was just me projecting: it isn´t. The film follows the book quite closely and is a page turner, more ‘exciting’ than the film, but without the depth or any queer connotations. Claude Viau, Marie´s young lover, takes up less space in the novel whereas Carné gives him a whole set of recurring scenes, his own struggle and dream, plus the way he´s visualised. The other question is, if this is so glaring to me now, why did I not notice it upon first viewing in Bologna where the main topic of conversation seemed to be the discrepancy in ages between Chaterlard/Gabin and Marie/Nicole Courcel, understandable as it´s one of the film´s main themes  (in the novel he´s meant to be 37 to her ‘six months short of 18). 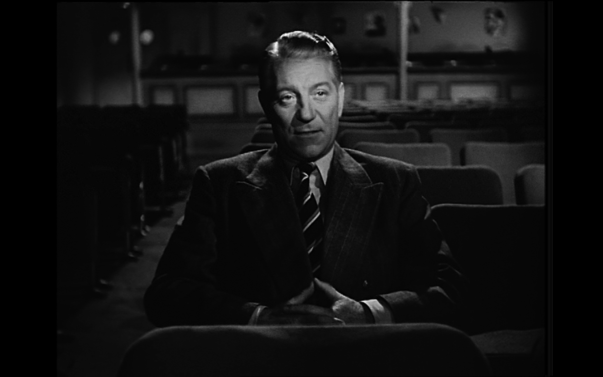 La Marie du port was shown as part of the Gabin mini-retrospective at Bologna and he´s glorious in it, understated but alive at every, and in every film he´s got a moment of expression that brings a character alive. The moment below is characteristic.  The scene is really about Marcel and his father (Julienne Carette, the poacher in Renoir´s Rules of the Game).  Gabin´s just responding. But look at how he responds; his expression evoking a whole lifetime experience of dealing and humouring drunks, completely relaxed and at ease, yet indicating a strength capable of dealing with every situation.: a man who knows how to handle himself.  It´s wonderful.

As is the film. It´s a great film that hasn´t yet gotten it´s due, possibly because Carné and Gabin, separately and together, have so many other more famous masterpieces in their filmography. Don´t let that deter you. 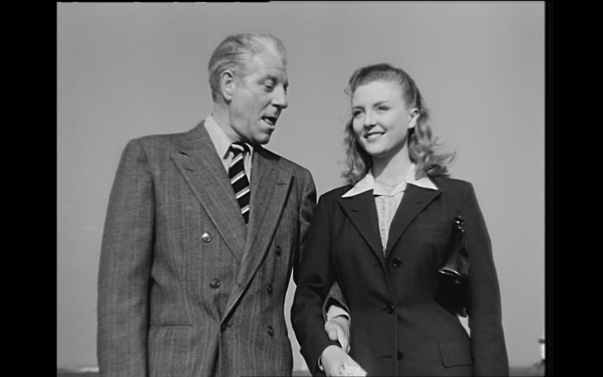