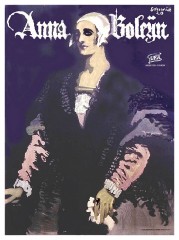 A disappointment. Until now, all Lubitsch films I’ve seen have been ones  I can imagine non-specialist audiences delighting in today. Anna Boleyn is of obvious historical interest — the most expensive film made in Germany to that point, thousands of Berliners worked on it, the President of the Weimar Republic visited the set sparking off riots amongst the extras, etc. I can’t imagine admirers of Lubitsch or of Weimar Cinema or of Silent Cinema NOT wanting to see Anna Boleyn. The story is a legendary historical tragedy so famous everyone’s familiar with the bare outline of it: Henry VIII (Emil Jannings) rejects his wife and his religion for Anne Boleyn (Henny Porten) but eventually sends her to the scaffold when she can’t produce what he wants, a male heir.

Anna Boleyn is an attempt by Lubitsch and his producers to repeat the success of Madame DuBarry (re-titled Passion in the US). Lotte Eisner historically situates both films as part of the Kostümfilme cycle, a ‘flood of historical films that swamped German cinema from 1919 to 1923-24’, which she damns as characterized by a ‘rather superficial treatment of certain purely exterior elements’ and sees as ‘an expression of the escapism of a poverty-stricken, disappointed nation which, moreover, had always been fond of the glitter of parades’[i].

No expense was spared in the making of Anna Boleyn. According to the Lichtbild-Bühne in 1920, ‘‘The buildings alone gave employment to 14 site foremen, 200 carpenters, 400 plasterers, sculptors, etc. The historically accurate copy of Westminster Abbey required 380 sculptures, while 500 horses and 4000 riders and spectators were required for the tournament scene. Miss Henny Porten had to have sixteen costumes, and Mr. Jannings ten.’ [1] It’s always a bad sign when producers publicise numbers; as if large numbers of extras and high cost were indexically linked to quality with the publicity magically transubstantiating accounting into aesthetics. No one’s that much of a sucker.

The film certainly looks wonderful and must have seemed an astonishing spectacle in its time: the river barges, the jousting tournament, the weddings and coronations: all look sumptuous. These scenes seem as much of the time they were made in as of the time they portray and picking apart this mix of Weimar Berlin and Tudor England can in itself be a kick for the audience.

Anna Boleyn boasts a very beautiful Henny Porten – noble, self-sacrificing, loving — and Emil Jannings as Henry VIII. This film helps us understand why Porten was the biggest star of her era in Germany: aside from her beauty, she embodied particular ideals of womanhood: this Anne Boleyn is submissive, loves poetry, rural pleasures, her country and her baby. Her final scene where she goes trembling to her death for the good of her child, her country and the future remains moving and is a powerful ideation of the value of self-sacrifice, probably just the moment before all we’ve since come to know as ‘Weimar Berlin’ would sneer those notions down and jazz them out of view for another generation. We understand too why Jannings was considered the era’s greatest actor; he’s brutish here and with a violent edge but also evoking a sexual danger  I’ve not seen in him previously.

Lubitsch does give character to a crowd. It seems to have a life of its own here, a personality, and one that shows different moods in different scenes; and of course this is an example of how Lubitsch told the of the social through the private, the historical through the personal. According to Hans Helmut Prinzler, the production was a great success. It cost around 8 million marks but ‘ticket sales in the US alone, however brought in 200,000 US dollars, almost double those costs.’[2]

This lovely tinted version looks sumptuous and is a real pleasure to watch. But this is the first of Lubitsch’s films that I haven’t wanted to show an excerpt to friends and say, ‘Look at this; isn’t Lubitsch great!’ If he is in this film; it’s in ways that I can’t yet fathom or know how to appreciate.

[i] Lotte Eisner, ‘Lubitsch and the Costume Drama’, The Haunted Screen, p. 72.