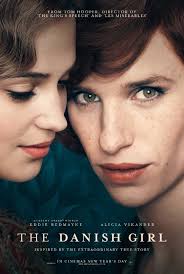 I finally got to see The Danish Girl  and was unexpectedly moved. My opinion of Tom Hooper hasn’t improved. There is a reason why his company’s called ‘Pretty Pictures’: he can make them pretty but he can’t mobilise that prettyness into meaningfulness. He’s obviously superb with actors and I think Eddie Redmayne and Alicia Vikander are believable and affecting; the former in a very risky part; also it feels like a kind of bourgeois filmmaking: all this delicate and thoughtful suffering in exquisite settings whilst thinking of art and higher things…and yet, on an emotional level, it still gets to you. It’s interesting.

There are complex themes around identity that revolve around sex, gender, but also artistic production. The need to express oneself is in this film as important as that of becoming one’s idea of who one wants to be in the face of harshly punitivie social prohibitions. The Danish Girl doesn’t necessarily present these ideas in a complex manner. For example, sometimes the film presents the question of sex as an essence struggling to overcome the boundaries of the wrong body that imprisons it; sometimes it shows gender in the very process of its construction as its costumed, painted and slipped on. Sometimes it confuses the various categories it seems to be dramatising. But what it might get muddled analytically it more than makes up for emotionally. The film gets us to understand and feel for ‘The Danish Girl’ and when he asks his wife ‘I don’t know what I’ve ever done to have earned such love’, I welled up. It’s a question often asked but this time we know the answer.

In The Danish Girl, there seems to be an overt contradiction between representing social transgression as a pathway to truth whilst deploying the most conservative aesthetics means to do so, which act as obfuscation, a kind of show-and-hide and perhaps an appeasement of potential audience reactions via gentle and extraneous pleasures. I at first thought Eddie Redmayne was too young to already seem so mannered. But then began reading the initial overdone gesture as a foreshadowing of the transformations to come and ended by thinking it a really marvellous performance. Vikander is just as good in a less showy part. Mathias Schoenaerts, Amber Heard and Ben Whishaw appear intermittently to offer unstinting support and very considerable glamour.