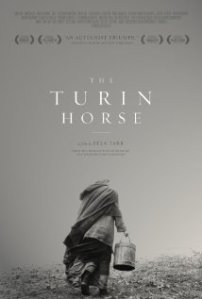 A masterpiece but one which may require a big screen to fully appreciate. The film begins with an anecdote about how, in trying to save a horse from a whipping, Nietzche fell and that fall may have spurred the serious mental illness that he would suffer from for the rest of his life. The anecdote ends with a question: what happened to the horse? And then the film begins and goes on to show us a peasant and his daughter with that horse, living through a storm in a barren land, day-by-day of poetic harshness: they get visited and threatened by gypsies (who also leave them a holy book), the horse refuses to work, the water runs out, they try to leave but the storm pushes them back. We see them eating an uncooked potato and certain to starve. It’s repetitive, slow, harsh, bleak, shot in black and white; the poverty grinds, albeit in classic, and classically beautiful, compositions that ennoble the attempt to keep on going on in the face of all evidence. János Derzsi as the father has one of the most beautiful and expressive faces, a leonine one, I’ve ever seen on screen. The harshness of life is everywhere and relentlessly present. No other film has so vividly and remorselessly highlighted to me how basic food, shelter and clothing mustn’t be taken for granted. The film is ennobling of its characters, shaming of its audience. Very beautiful.