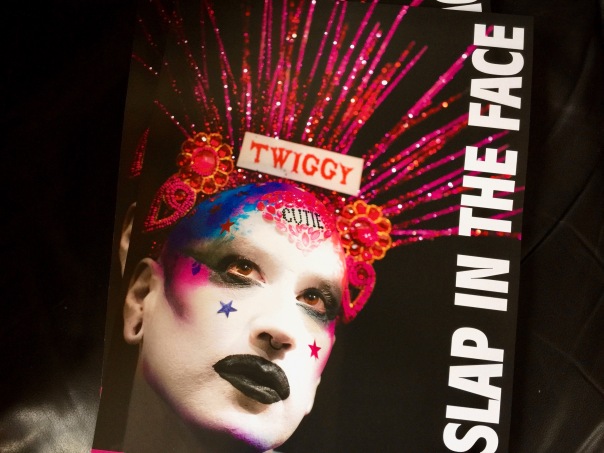 A delight to sit down and talk to Christopher Twig (aka Twiggy) on the occasion of the forthcoming retrospective of his work — Twiggy Birmingham: Slap in the Face — curated by Trevor Pitt as part of the forthcoming ‘Shout’ Festival from the 9th-19th of November. To the LGBT community, Twiggy is as much of an icon of Birmingham as Selfridges or the Library: everyone who’s been to an LGBT club or to a gay pride parade in the city will have at least walked past and usually had their photo taken with him. His evolution as an artist is also the city’s evolution in respect to LGBT cultures. A maker of ‘Happenings,’ a performance artist non-pareil, a constant designer of unique and iconic looks, he’s conjured up a space for himself and his art where one didn’t exist before. The ‘Twiggy Birmingham: Slap in the Face’ exhibit on his work, curated by Trevor Pitt, is long overdue recognition of his achievements as an artist. As Pitt describes it, ‘Twiggy Birmingham is an ongoing creative project spanning over three decades that takes the body, costume, adornment and performance to the level of an art form. From androgynous punky Goth, to energy fuelled Club Kid to flamboyant event host and walkabout artist, to outrageous stage performer, Twiggy Birmingham has documented their experiences through photographs, video, costume and memorabilia. An unmissable figure in pop, club and drag culture of Birmingham and beyond’. The experience will be open to the public from 10-18th November at Vivid Projects, 16 Minerva Works, 158 Fazeley Street Birmingham.