It can sometimes feel like Warner Brother had only a handful of songs at its disposal in the early Thirties: here it’s once again ‘We’re in the Money,’ probably America’s most overplayed song of 1933, that practically constitutes the soundtrack. The film is worth watching today for many reasons: an opportunity to understand why George Arliss was such a big star in the early 30s (he’s got energy, theatrical verve, good timing); a chance to see a very blonde and very pretty Bette Davis in an early role (she credits Mr. Arliss, as she always referred to him and as he was often billed, with helping her early in her career); and perhaps most significantly, the film’s deft ideological operation of reconciling ‘The Working Man’ with America’s owners of Capital. Not unlike today, middle-management is depicted as the swindling cause of every problem.

Arliss plays John Reeves, owner of one of the biggest shoe-companies in America. His company is being so well run by his nephew, Benjamin (Hardie Albright) that he feels the need to prove he’s not ready to be put to pasture yet. Reeves goes fishing and meets two nice but spoiled rich kids, Jenny (Bette Davis) and Tommy (Theodor Newton), who swim over to his dinghy from their yacht in order to get a lift to the bootleggers. The kids turn out to be the heirs to Reeves’ biggest competitor, Heartland Shoes. They’re being swindled by Heartland’s manager, Fred Pettison (Gordon Westcott), who is secretly running it right to the ground under their very noses so he can buy it cheap. Reeves had respected their father and been in love with their mother. In a heartbeat, he becomes their guardian, teaches the young heirs the value of work and the value of money, teaches his nephew there’s life in the old man yet, Jenny and Benjamin fall in love, Pettison gets booted out and — under a loving paternal gaze — the two companies merge along with the young couple. Capitalism is once more saved from chisellers by love, street smarts and hard work for the benefit of all.

This is not exactly typical, as Mick La Salle writes in Dangerous Men: Pre-Code Hollywood and the Birth of the Modern Man, ‘Calvin Coolidge, president during the economic boom, reflected his era’s reverence for business when he said, “The Man who builds a factory builds a temple.” But President Franlin Roosevelt, entering office at the height of the Depression in March 1933, saw a different situation, “The money changers have fled from their high seats in the temple of our civiliztion.” In this new climate, the old values seemed inapplicable, naïve, sometimes hypocritical. Occassionally, a film might come along, such as Arliss’s The Workiing Man (1933), in which he played a shoe manufacturer with a thing or two to teach the younger generation. But for the most part, busines in pre-Code films was pretty much nasty and dog-eat-dog, a life for men with a killer instinct (p.161)’.

There are two aspects that especially caught my eye: one, in the clip above, the identification of the factory owner as ‘the working man’ — in this film, they are one and the same; the other the muddled, or perhaps complex, attempt to endow Bette Davis’ character with the ideal traits of an Edwardian lady (sentimental, filial, etc) but also those of a modern career girl: independent, eager to go out into the world and learn about business. Bette Davis’ star persona would be a site of struggle for this type of ideological discourse for decades to come.

The other element that caught my eye (see above)contra to the snappy wipes and cuts so characteristic of Warner Brothers film of this era is the length of time a letter was allowed to roll onscreen. Everything is fast, fast, fast but then we’re shown a letter the film seems to come to a stop for an inordinate amount of time, like the filmmakers wanted to maker sure the audience got the chance to read it but weren’t too confident of the audience’s level of reading skills.

I was reminded of all of this recently whilst on vacation in Gran Canaria. The scenery was as spectacular as only an accident of nature can make possible — the rolling beaches, the spectacular sunsets on the horizon; the bougainvillea, hibiscus and bird of paradise flowers peeking through bushes, the sand-dunes. What was on or around nature, however, was as ugly as only greedy and thoughtless human intervention can make it: indistinct blocks of flats and malls, all higgledy piggledy and vying for space as close to the beach as possible; every trace of man’s work a blot on the landscape.

Gran Canaria is where the working classes of Northern Europe go on holiday. Most buildings seem in need a new coat of paint and the cons were only mod circa 1975. There’s a desperate gaiety about the place, like it’s New Year’s Eve year-round; all that expense must result in a good time and sex must be found to go with the sun and the sea or the holiday will be a bust; there’s a grim determination to not fail at having fun; and this provision of fun and sex and cheerfulness is what the place and people who work there are meant to provide.

At the ‘Restaurante El Gran Obrero/ The Great Worker’s Restaurant’, however, the talk is not of the provision of pleasure for the tourist trade but of the problems the locals are having in just getting by; and one overhears the same ramblings here as one does throughout the Spanish mainland : ‘Rajoy, robo por que soy/ I am Rajoy, therefore I rob,’ says one. ‘But it doesn’t matter who’s in power. They’re all crooks.’ ‘You wouldn’t say that if your husband lost his job and they took away your pension’. ‘Don’t worry about me, I ‘d steal a sack of lentils and I’d get by better than I do now’. 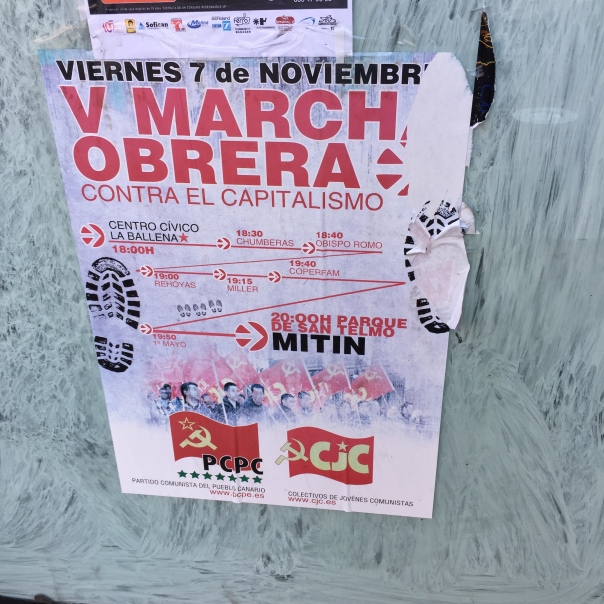 The dissatisfactions of the locals and the illicit desires of the tourists find a common if surreptitious and illicit home in the graffiti, posters and post-its that adorn the walls and lampposts of the place. There’s a forlorn air to most of them, as when the poster advertising the promised pleasure is for an event now past. They’ve at one time been hopeful: how many people turned up to that march against Capitalism now past? Will anyone actually get on that website and organize a boycott against Repsol’s despoliation? Many continue to be scary: the praise for Franco and Fascism that is silenced in the mainstream but finds too recurrent an expression darkening whitewashed walls throughout Spain; the more local appeal to the Ultras of Frankfurt to work towards the ancient promise of victory. 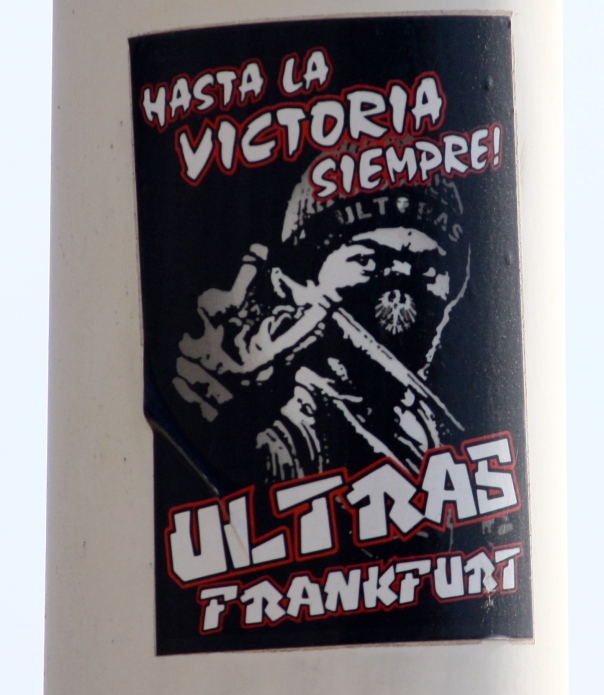 Often they evoke cheapness – producers that don’t have the means to draw an audience’s attention in other ways – or tawdryness – the drawing of attention to something that has to be done surreptitiously or in hiding. Or mere fun: ‘stop texting me’! 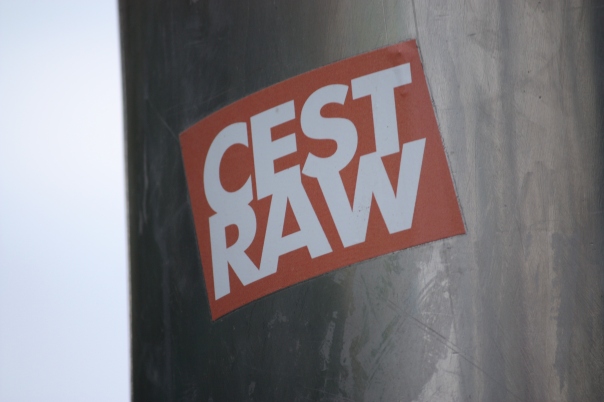 These roiling murmurings, by their very nature liminal and interstitial, reward attention in every guise. They speak of silenced conversations, disbelief, dissatisfactions, dissidence, all roiling up to the surface, expressing another point of view, sometimes in fun, sometimes in anger, even if only to hit a wall or a lamppost near you, all asking for change, most succeeding in changing only the surface you’re looking at. There’s a power in this mode of expression, one that is particularly interesting in that it’s drawn entirely from impotence

The saddest bit of graffiti I came across was a scrawled note on a white wall, at shoulder height, large enough to call attention to itself, but written with a hurry that nonetheless suggest an element of clandestinity. The literal translation reads as follows ‘Today, Thursday 8th of May 2014, I shall commit suicide at 4h25. My life is worth nothing and the only thing I have is suffering. I ask of God that he forgive me’.

Is the note real? What makes a person want to write it, even if it’s not. Did the person go through with the act? If they didn’t, why didn’t they come back to erase it? If the person did go through with it, did anybody they knew come across the note? What despair does this note speak of? Is the despair lessened by the person still being alive? These are depressing times, austere times, even in spite of, or particularly in the light of so much sunshine and colour. The Graffitti tells a story rather different than the brochure, no less interesting, and best read alongside it.