Today We Live is a curiosity: the only time Joan Crawford and Gary Cooper co-starred; the only time Faulkner wrote a script of one of his stories. It’s a handsome but lifeless film, redeemed only by some exciting areal sequences retooled from the  footage in Hell’s Angels (Howard Hughes, USA, 1939).  Crawford is arrestingly beautiful and very bad in the role of  Diana ‘Ann’ Boyce-Smith: one can’t help but giggle when she remembers to put on her English accent, which luckily for us isn’t often.

Only the clothes Adrian designed for Crawford make an impression. Theirs is a famous partnership that endured for 28 films.  He’s credited with the wide-shouldered look she made famous in the 30s.The year previously they’d made a hit with their collaboration for Letty Lynton (Clarence Bronw, USA, 1932), with the the famous dress being adapted in various patterns and flying off shelves and Sears’ catalogues and onto the shoulders of young women across America (see above).  As Jessica Ellen writes in her blog:

‘(Adrian) designed a dress to reflect the 1930s eagerness to “get back to femininity” after the flapper years and thus yards and yards of fluffy organza was used to create an excessive ruffled effect. The waist was cinched to show off Crawford’s best attribute and the shoulders were emphasised, as Adrian desired. When the dress finally debuted in the film, it set of a nation-wide fashion craze as every woman decided she wanted to look like Joan Crawford! Thousands of more affordable copies were made for department store sales and allegedly every single one of them sold! Edith Head once said it was “the single most important influence on fashion in film history” and with it, the Crawford shoulders were born!’

In Deborah Nadoolman Landis’ Hollywood Sketchbook: A Century of Costume Illustration, she writes that Adrian was arguably the king of Hollywood Golden Age glamour,

‘ (he) didn’t confuse the art of costume design with fashion (and) embraced the inherent problems of creating costumes for black-and-white movies. Fahion designers, he explained, ‘have to please the human eye. I have to satisfy the discerning eye of the camera…in black, white and gray. For this reason, line is vastly important, and only the finest fabrics may be draped or cut in a satisfactory manner’ (p74).’

That he designed for the camera, and the way fabric looks in black and white is very clear in Today We Live. The issues of line and fabric are more questionable.What is immediately noticeable in Today We Live is that the dresses that look so beautiful in photographs begin to seem less so as soon as Crawford begins to move; how it’s almost as if the clothes were designed for stills rather than for motion pictures. 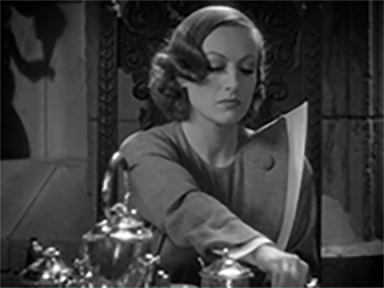 Contrast for example, the image above — an ideal of art deco elegance and geometry — to the way the dress looks in motion: uncomfortable, with additional purposeless pleating on the back, badly tailored so that the material scrunches up around Crawford’s waist, and with that ridiculous cardboard decoration which slashes diagonally way past the neck and threatens to decapitate Crawford should she try and look behind her shoulder.

Next, look at the elegance of the outfit above; the beret at a jaunty angle, the metal buttons catching and reflecting the light, and cascading symmetrically way from the neck. But then see below as Crawford takes off her coat. The top is very badly taylored: look at the creases it makes from her breasts, the way the material gathers into unflattering folds along the sleeve, the ugly fold as she lifts her arm, which creates an unflattering line from the arm past the shoulder. Lastly, see how all of the front of the dress seems to scrunch up into folds as Crawford goes to comfort the made. It’s almost like motion transforms what is beautiful in stills into unflattering uncomfortable uglyness in motion, the costumes more architecture than clothes.

Lastly compare the still to the clip. It’s one of Crawford’s most famous looks, one we’ve seen illustrating  book covers (see below for all)

Now, look at the clip above. The closeup with Crawford framed by the candles is gorgeous. But as soon as she stands up all the ruffles and bows are too much, too impractical, too creased. Then when she turns around, turns her back to the camera, and moves away from the table, the back of the dress is ridiculous, with those extraneous, useless, bits of material riding up around her waist, making her bum look bigger. It’s completely impractical. The pleats on the flounce need ironing. Yet, they are constantly going to be sat on. A ridiculous and gloriously impractical dress. It’s no wonder that upon the film’s release, Variety panned the outfits : ‘…”Gowns by Adrian” were extreme and annoying’.

They are extreme and would look extremely beautiful if Crawford had sat for some stills from Hurrell (see above). But for Hawks in Today We Live — i.e. in motion and in character — it’s one more element that takes you out of the story and helps sink this particular ship.

It was only upon reading Howard Gutner’s marvellous Gowns by Adrian, the MGM Years 1928-1941, that I discovered  the reason for that discrepancy between the way Crawford’s clothes look and the way they move. Prior to the beginning of Today We Live, Crawford had gone with her then husband, Douglas Fairbanks Jr., to Paris and discovered Schiaparelli’s couture. She asked Adrian to copy some of those lines for her. He made up a trio of dresses that were designed purely for publicity purposes. Crawford was a late addition to the cast of Today We Live and she insisted on  wearing the dresses in the film, which Hawks hated, because he quickly realised they did not move well. But in those days, Crawford was billed as ‘the most copied girl in the world’ for her wardrobe and she won, to the detriment of the film.