We’ve heard of Edith Head, Travis Banton, Orry-Kelly, Irene, even the dreaded Helen Rose. But who is Milo Anderson? I had to look him up. He doesn’t even get a wiki entry in English. Luckily the French and Germans are more thorough. It turns out he worked at Warners from the early 30s to the late 50s and designed the clothes for many films you’ve probably seen (To Have and Have Not, Mildred Pierce). The reason you’ve probably never heard of him is that he designed clothes like these for Doris Day’s first film, Romance on the High Seas. Her charm and the positivity she exudes — plus that great voice on hit tongs like  ‘It’s Magic’ and ‘Im in Love’ -meant she survived the clothes and became a film star anyway. But she really did have to survive them. Janis Paige wasn’t so lucky.

As you can see below, sometimes, when he doesn’t allow himself to get too matchy-matchy,  a feel for colour can be detected: but the design, cut and fit are atrocious. Though they do make a ‘statement’: 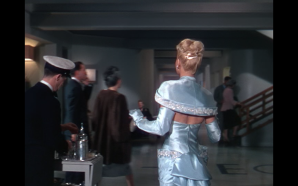