Watching films from Mexico’s Golden Age of Cinema, I’m constantly amazed by the  beauty of the people and the landscape, the siding with the poor against the rich, the stark dramatisation of the levels of injustice with all that natural beauty as a background. La Escondida, also known as The Hidden One in English, is no exception.

Here the story revolves around a rural couple, Gabriela (María Félix) and Felipe (Pedro Armendáriz), madly in love, but oppressed by poverty and the injustices of a society in which the local landowner has complete power over them. She makes a living selling water to passing trains and makes full use of her extraordinary beauty in doing so. The local women resent her for this to the point of stoning her. He’s a revolutionary, waiting for the right moment to take up arms. She’s burning with love for him and wants to get married right away because she’s superstitious something will happen to separate them and fears once they’re separated they’ll lose each other. He and his father finally agree to the marriage –she’ll move in with the family and they’ll somehow manage feeding one extra person —  when he’s sent on a mission. She steals some money from the company shop to go with him. She’s not seen but the shop manager wants sex with her in exchange for his silence as she’s the only one who could have done it. She refuses and is on her way to jail when he sees them and takes the blame. She pleads to reduce his sentence and he ‘only’ gets sent into the army instead. When he returns, as a Lieutenant, he finds first that she’s gone, and later, that she’s become the Governor’s posh mistress who has to be kept hidden  to keep up appearances, thus the film’s title.

The film’s sense of history and its politics are clearly articulated in the opening titles: ‘Opression and tyranny stung the Mexican people. Vassalage was most evident in those large estates, haciendas and villages that still did not figure in the map of reason and human rights. The stoic and submissive peons bit their tongue in silence over the ignominy, accumulating beatings and opprobrium from the privilege caste. Suddenly, the longing for liberty thundered through all parts of the Republic. the clamour for social justice rose as one shout over the hills and valleys until reaching even the most distant sierras where rose legions of the brave, the ignored peasantry whose blood fertilised the plains of the north and watered the exuberant lands of the south. There surged the Caudillos, rough men, obscure and humble, giants of liberty, in whose blood was forged the structure of a new Homeland, of a strong and fertile Mexico, vigorous and progressive. This is a dramatic episode of that turbulent and confused time. The story of a love swept up and battered by the whirlwind of the Revolution.’

There is much to admire: the formal beauty, the framing of landscape, of trains going through it, of the armies and shoot-outs. Figueroa, who worked with Ford in The Fugitive (1947), is here, with Gavaldon, Ford’s equal in making landscape shots expressive of feeling. And the film is a high-budget one with great production values so Gavaldón has the means necessary to achieve the effects he desires to express.  I also love the film’s narrative economy, one often characteristic of a genre which is mainly discussed in terms of excess. See in the extracts below how the train goes in one direction to take Felipe to serve his sentence, and the same train tracks simply move in the opposite direction to almost instantaneously return him to his village.

In the same clip, now above, I love the moment where she’s holding his hand, crying. He asks her, ‘what if I don’t return?’ and she says, ‘I’ll kill myself if you want to. I can throw myself right here on the tracks so you no longer have to worry about me’.’Wait for me,’ he responds, as the speed of the train overtakes her, and she falls to the floor sobbing. The beauty of the composition, the landscape, the rhythm of the movement of the train is a setting for feeling; like the background rhythm in a song  that is  a setting for the high notes and gives them meaning.

In a beautifully written piece on Gavaldón for Senses of Cinema, David Melville-Wingrove writes: ‘ it is natural that most of Gavaldón’s films have absurdly melodramatic plots, extravagant and larger-than-life star performances, feverish and hyperbolic mise-en-scène and thunderous and over-the-top musical scores. We should remember that film melodrama – much like bel canto opera or classical ballet – is a stylised, not a realistic, art form. Watching La escondida/The Hidden One (1956), some will complain that María Félix at 40 looks far too old and too glamorous to play an 18-year-old peasant. That is as absurd as carping that Margot Fonteyn in Swan Lake does not look like an actual swan’. 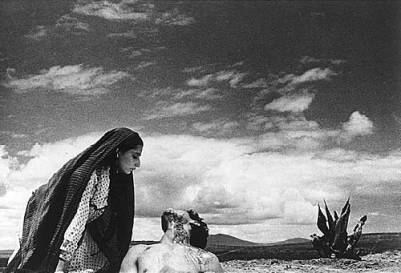 The film contains a pictorial hommage to Sergei Eisenstein’s Que Viva Mexico! I loved the framing of the love story amidst revolution but Gavaldón’s style of filmmaking is the opposite of the Russian director’s. Here the focus is not on structures or the intellectual montages designed to express movements in history but on the effects of these revolutionary events on the things poor people value in life: love, family, food. As you can see above one of the film’s title’s was La Passionaria, after the famed Spanish revolutionary of the Spanish Civil War. But Gabriela is nothing like her. In fact, part of the film’s success is in how it makes us understand why Gabriela wants something better for herself. The women in town are jealous, the men are after her, both brutalise her in different ways; she’s waited a long time to marry and has tried everything to be with him. We understand why she wants the good things in life and what she’s done to get them. But we also understand her love for Felipe.

It’s what melodrama does, it makes us side with the powerless and downtrodden by almost musically constructing a world of feeling in which the injustices of the world are made plain and people’s transgressions made understandable. And not just through music, although Cuco Sánchez’s songs are great — but through the deployment of mise-en-scéne. In this sense the film works though it’s far from Gavaldón’s best — I haven’t seen many but I already like Camelia more.

There are a few reservations things worth noting. Arméndariz an Félix are one of the great partnerships in screen history (as are Arméndariz and Dolores del Río) but they aged at different speeds. Here he’s filled out, looks old and a bit haggard. She looks thinner than her younger self and her face looks different, just as beautiful and not the least bit older. She’s filmed with such care there are moments that are moments in which she exemplifies everything Hollywood divas are accused of. See the picture above, she’s just been brutalised, her dress half torn off, her body wounded….but look at her. Lastly, I bought the video on the ‘Naimara’ edition, the only one available, and it made me regret not simply seeing the film on You Tube. The Eastmancolour has faded in this print, and some scenes are so dark, they’re almost in the  blurrovision often characteristic of films on youtube. I wish there were a better print of this available.

La Escondida is not a great film. But it is a good one by one of the great directors of melodrama with some of the greatest stars in film history in fine form; its worth seeing for that, even in blurrovision.