When Shelley Winters took on small roles because they were great parts, she had herself billed as Miss Shelley Winters, like Miss Ruth Chatterton or all the other stars of yesteryear with pretensions to being great artists. The appellation never felt pretentious on her, partly because she was a great artist, partly because she was the kind of gal who told her audience about her annual trysts with Burt Lancaster.

In the great scene below Miss Shelley Winters as ‘Dixie Evans’ reveals how the studios in the classic era exploited bit players like her, women who were already damaged in some way, hired them for their figures, kept them hanging around with bit roles, exchanged sexual favours for the expectation of larger roles that never came, and used them to entertain visiting dignitaries. Cheaper than hiring hookers. Odets knew how to write, albeit a bit floridly, and he was part of that world and knew what he was talking about. And Shelley had been one of those girls for a long time before her eventual success, and had roomed with Marilyn Monroe: she also knew and she could certainly act it out and communicate it.

I hadn´t seen the film for years. I´d forgotten how beautiful it is. Each frame a painting, as they say, filmed by Raoul Coutard. And each evocative, expressive, beautiful. But it´s 24 of them a second, part of a shot, often accompanied by dialogue or Georges Delerue´s beautiful score. And there´s Bardot, and Piccoli, and Jack Palance and Lang and Bazin and cinema as it once was, and even then in the process of becoming something else. I couldn´t stop myself from grabbing frames. It´s on MUBI. 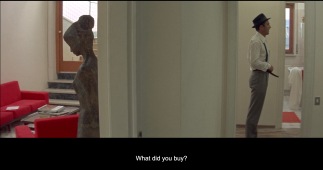 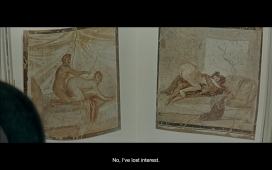 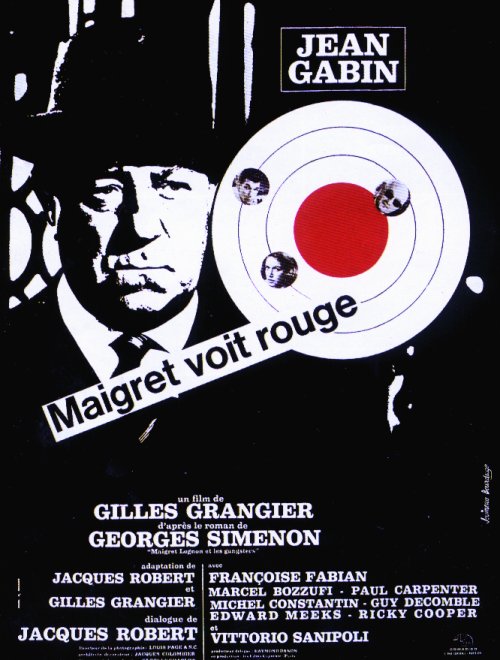 A minor Maigret. I’d thought Jean Delannoy’s direction of Maigret tend un piège (France/Italy, 1959) efficient but unexciting. But Gilles Grangier’s work here makes Delannoy seem Jean Renoir in comparison: Maigret voit rouge is visually uninteresting, the plot is recounted in great and very dull detail, often by Gabin, who seems tired, perhaps because he’s been asked to do what is usually relegated to supporting players. Too bad he didn’t feel insulted: it might have given a little fire to his performance. That said, he’s Gabin: he’s always watchable; and there’s Françoise Fabien in an early role as Lily, a gangster’s moll; Michel Constanstin looking like an even more threatening Jack Palance, as Cicero, the American killer; and the always droll Guy Decomble as Maigret’s sidekick, Inspecteur Lognon. The fight and chase scenes are not terrible either. It’s not nothing; but it’s not much.

The story begins with an unknown person being shot down by a passing car. Inspector Lognon is a witness. But when the police arrive, the body has disappeared. Lognon follows a lead to an American bar and gets badly beaten up on his way out. Inspector Maigret takes over the case, discovers that the bar is run by Pozzo (Vittorio Snipoli) an American of Sicilian origin and that Lily, the Belgian barmaid who works there, is involved with an American and has been hiding his mafiosi buddies. Maigret calls in the help of Harry McDonald (Paul Carpenter), an American diplomat who turns out to work for the BFI. All is not as it seems. Maigret will discover that what’s at stake is a key witness to a Mafia case in the US and he’s got to find him before the American gangsters do.

The film is most interesting when seen from an ideological perspective. Maigret voit rouge  is set during the height of the Twentieth Century’s American Empire, and at the very peak of it’s most glamorous moment, the Camelot years of John F. Kennedy’s Presidency. France seems in thrall to everything American (see images at the very bottom): Chicago, gangsters, bowling alleys, transistor radios, Rocky Graziano; jeans, t-shirts and talking as if one’s mouth is full, like Marlon Brando. But there’s always a twist. Here the transistor radio plays jazz. Moreover, though France has reason to be grateful to an America so recently France’s liberator, it’s not just going to roll over and let them take over the country. I wonder how audiences reacted to the clip above where the American says:

‘I warn you I’m going to have to call Washington.’

‘And I warn you that I’ve been obliged to inform the Ministry of the Interior.’

‘It will become a diplomatic incident.’

‘Better then a judiciary error.’

‘This affair is not what it seems. I belong to the FBI.’

‘And I to the PG, each to his business.’

‘But listen to me Jules.’

‘There’s no more Jules. If you want to discuss the affair get in touch with Inspecteur Maigret at Quaie des Orfèvres from 8 o’clock’.

I imagine audiences of the time in France applauded the exchange. Needless to say, there’s a reconciliation at the end with Maigret and McDonald, and thus France and the US, becoming friends once more. But this time on terms set by Maigret. It’s very vividly dramatised and the only element of the film I found fascinating. I’m not surprised that this, Gabin’s third outing as Maigret, was also his last.