A mega bumper double podcast today, as we see Mission: Impossible – Fallout twice and incorporate both discussions into one episode. Long story short, we had tons of fun both times and you should see it.

We both adore the visual storytelling and the elegance of the action. We fawn over gripping sequences which evoke silent cinema. We discuss in depth the idea of Ethan Hunt as a moral character, something that the film places front and centre throughout, giving him choices to make and emphasising the protection of innocents and self-sacrifice. José doesn’t quite buy it but Mike does his best to talk him round.

Neither of us is quite sold on the concept of the villain – he’s not enough of an idealist – but Cavill’s performance unquestionably elevates him and he’s a constant delight to watch. To José, he’s the new Errol Flynn. Mike focuses on two implausible scenes to compare and contrast, exploring why he believed in one but not the other. José describes how the action scenes develop like good jokes, with ideas building on top of each other in logical ways. And we go off on a tangent about Idris Elba for some reason.

The podcast can be listened to in the player above or on iTunes. 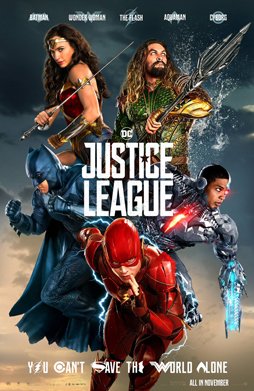 The costumes are atrocious, the look busy and garish, few of the jokes land, Wonder Woman is reduced to mothering the boys: there’s little to love in Justice League. We, however, have a hoot pointing out its many, many faults. Join in the laughter.

José Arroyo and  Michael Glass of Writing About Film 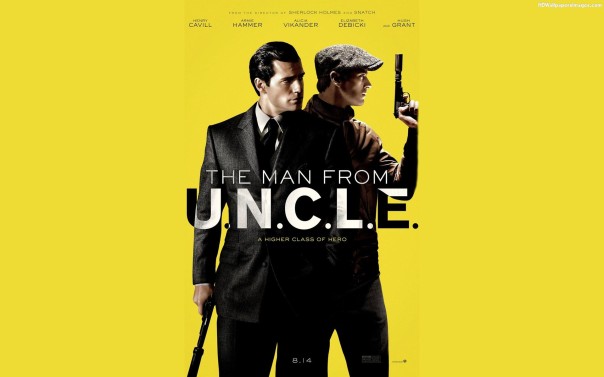 The Man From U.N.C.L.E. is unexceptional but rather fun, in a slightly leaden way. Guy Ritchie directs the action well, attempts a cheeky ironic tone for the film  he doesn’t always succeed in achieving, and is not very good with those actors who need his help: Armie Hammer is completely inexpressive physically though does a great accent and can find comic timing vocally that somehow eludes other aspects of his performance; Henry Cavill does better and is better looking doing it but he’s done so much weightlifting his body strains at his suits, evoking a kind of physical boxiness that works against that nonchalant physical elegance the character is meant to exude; a rare instance in which a great body works against the role (though his performance is also sabotaged by the cinematography); Alicia Vikander is pretty but can’t find a rhythm  for her performance and seems wasted; Elizabeth Debicki fares better as the villainess and her long leggy frame, elegant way of wearing clothes, and understated ironic way with a line makes her very enjoyable to watch. But it is Hugh Grant —  only in the film for what seems like two minutes — who steals the show. A trifle, not light or sparkly enough but with some clever action and a great score of 60s tunes. The audience did like it even though either the print or the projection didn’t provide the luminosity the colour palette seemed to require. It is better and more enjoyable than an episode of the old TV show.

Addendum: I have now seen this twice more on Netflix and found it great fun. My appreciation of Armie Hammer and Alicia Vikander increased; my love of the soundtrack sky-rocketed. It is a trifle, very broad and fast-moving with the set-pieces working much better than my first impression. I now recommend it.

Henry Cavill in Man of Steel looks more like the Superman of my imagination than Brandon Routh ever did in Superman Returns; he’s got the better curls; more defined cheekbones and squarer jaw; a beefier, hairier and more masculine body. Routh looked too nice and insubstantial, like a scared rabbit suddenly comforted by a gentle stroke. However, Christopher Reeve’s gee-gosh Superman remains the definitive one; and that goes for Margot Kidder’s klutzy Lois and Terence Stamp’s glamorously decadent Zod as well. No one I’ve seen since has erased my memory or lessened my affection for those three actors in those roles.

Man of Steel also suffers in comparison to the earlier films in other ways: it lacks the sense of wonder and amazement we felt when watching Superman fly or use his super-powers in the 1978 film directed by Richard Donner; it also lacks the wit and charm Richard Lester brought to Superman II (1980), though to be fair, wit and charm is not what’s aimed for here:  Zac Snyder was probably chosen to direct because of the ‘mythic seriousness’ he brought to Wachmen; but he unfortunately also ends up bringing way too much of the heavy-handed portentousness evident in 300 .

The film is long and feels it. The myth of origin story that would be periodically retold in comic books since  the 1940s via only a few panels  is here slow to get going and then ends up taking almost two and half-hours to finish. There is some flashy design: I particularly like how the Krypton story is visualized as molten metal that looks like fascist coin reliefs. But quite a lot of the film drags There’s not a single joke. The only time the audience seems to react to the movie at all is when a young female soldier can’t stop staring at Henry Cavill because ‘he’s hot’. He is indeed, and the film has some dazzling scenes, mostly towards the end with the aerial fight sequences. I also like how Michael Shannon brings an air of Boris Karloff to his playing of Zod. But there’s not much that truly delights.

Man of Steel looks grayish-blue, as if darkening everything made it ‘deeper’. But really, it just means we neither see well not get to experience the aesthetic pleasure of a fuller colour palette. There’s so much destruction of buildings and cars that one gets beyond caring. Special effects were once prized because they filled the audience with awe and wonder; in seeming to make us see the impossible they evoked feeling; now effects seems to have lost touch with affect; there’s nothing at stake in all of these bombs blowing up and buildings falling; it just seems to be a matter of perspective and scale, as in drawing. Explosions are bigger, we can see costumes and space ships with greater clarity. But the effect of bigger and clearer does not end up being more intense, or complex or more fun.

I can see what attracted Russell Crowe to the part of Jor-El — the challenge of filling Brando’s shoes — but they weren’t very big shoes in that role, and they remain unfilled – Brando’s performance was pretty lazy but he had that zaftig silvery look that connoted something extraterrestrial or deific. Crowe is fine but doesn’t erase the memory of Brando or add anything new. And what I truly don’t understand is why they go to so much trouble to avoid saying Superman, it’s almost always Clark or Jor-El, they also pretty much avoid association with the American flag (which would have been unthinkable once; Superman was as much a symbol of America as the Red, White, and Blue) but the film still can’t help getting all misty eyed with the boys in uniform. It looks like the filmmakers spent a lot of time thinking through these changes but they didn’t resolve them well.

I suppose when I think of it, one can’t resist going to see it.  It’s a big-budget spectacle with lots of big stars and a name director on one of the great visually iconic myths of 20th Century pop culture. The connection to Christ is clunky and explicit but woven in so tightly on so many levels of the narrative that it’s bound to keep fan boys and scholars busy ‘interpreting’ for years to come. On another level, there are also interesting connections that can be made in relation to the Galactus figure in the Silver Surfer and how some elements of those story-lines are woven here. Viewers may be interested in the casting of Larry Fishbourne as Perry White; or that the Jimmy Olson character is now named something else and runs a website; or that some fool decided to cast the glorious Diane Lane as Ma Kent (MA Kent!). Admittedly, the set-pieces are good, with the areal fight between Zod and Superman better than that, genuinely exciting in fact. But really, it’s a dud of a film.