My original review of Broken Embraces as  published in Sight and Sound in 2009:

Pedro Almodóvar’s Broken Embraces is the work of a master film-maker who has lost control of his material. It’s an undisciplined and occasionally self-indulgent work: entire monologues that are meant to be dramatic culminations end up defeating the actors with the sheer amount of unnecessary plot they are forced to recount; the incessant voiceover narration by the central character Mateo – a former movie director who, now blind, writes screenplays under the pen name Harry Caine – while permissible for the noir genre the film stakes a claim to, is excessive in amount and deficient in tone, telling what’s happening but failing to communicate the feelings associated with these events. The film-within-the-film Chicas y maletas (Chick and Suitcases) is a sad mistake, even if the concept behind it – how fragile an art film is, how editing can reduce it from greatness to trash – is an interesting one. It’s clear, moreover, that it’s a reworking of Women on the Verge of a Nervous Breakdown(1988): to use one of the greatest comedies of the 20th century as source material for Mateo’s film maudit shows an uncharacteristic lack of judgement on Almodóvar’s part. When Mateo/ Harry, his agent Judit and her son Diego look at the director’s cut of Chicas y maletas and say, “It’s marvellous,” how can an authence familiar with Women on the Verge think anything other than, no, it’s not?

Those who require neatness, order, rigour and balance in their art will therefore find Broken Embraces a disappointment. But those with a more open disposition will find much not only to enjoy but to treasure – for example, when Mateo first sees Lena and we gasp right along with him at the beauty of Penélope Cruz and the beauty with which Almodóvar has shown it to us. It’s a moment to rank alongside Rita Hayworth’s expression when she says, “Who, me?” in Gilda (1946), or Elizabeth Taylor and Montgomery Clift’s kiss in A Place in the Sun (1951). And when Diego asks Mateo/Harry, who is feeling very down, what DVD would give him a little lift, he replies: “I’d like to hear the sound of Jeanne Moreau’s voice.” It’s something anyone who knows and loves cinema will understand.

Broken Embraces is, in fact, a cinephile’s dream of a movie. Penélope Cruz’s character is called Lena for a reason: Marlene Dietrich played Concha, the Spanish temptress who bewitches and destroys rich and powerful older men, in Josef von Sternberg’s The Devil Is a Woman (1935). The work was based on Pierre Louÿs’ novel La Femme et le Pantin, which Julien Duvivier turned into a film with Brigitte Bardot in 1959 and which Buñuel used as source material for That Obscure Object of Desire in 1977. Angela Molina, here cast as Lena’s mother, played the earthy Conchita (as opposed to the more ethereal one played by Carole Bouquet) for Buñuel. Thus Lena here is the daughter of both Dietrich and Molina (and perhaps even Bardot), and of the cinematic creations of von Sternberg and Buñuel. Lena’s nom de plume, Séverine, is another nod to Buñuel, this time the character played by Catherine Deneuve in Belle de jour (1967). The film is full of such references, refracting a kaleidoscope of connections.

I mention them not to show what a good student of cinema Almodovar is (though there are few directors better), but because such an engagement with cinephilia is crucial to a film that is an extended thesis on cinema itself: the pre-credit sequence is made up of ‘stolen’ footage taken by the video camera that film-makers attach to the normal camera to see takes during and immediately after shooting; the first shot we see after the credit sequence is a light coming through a window and a turning page reflected in an eye – an image condensing a century of debate on cinema as a window on the world versus cinema as spectacular storytelling. Lena breaks up with her older lover Ernesto by speaking the words she is uttering in the silent footage he is watching – in effect a live dubbing of oneself. The film offers a whole treatise on the importance of editing, both through its plot and via what we are shown of the film-within-the-film. When we see an excerpt from Rossellini’s Voyage to Italy (1954), it’s not mere padding or empty quotation, it’s both source of, and comment on, one of Broken Embraces’ central themes (not to mention its title).

If Broken Embraces is sure to interest cinephiles, it will also be indispensable to Almodóvar fans. Aside from its take on Women on the Verge, it is a complement genetically to Bad Education (2004) and perhaps even Live Flesh (1997), and a continuation of themes explored in All about My Mother(1999). The forgiveness of absent fathers is a key, almost a structuring theme, in the film.

Broken Embraces offers evidence too of Almodóvar’s familiar fascination with structure (Lena sells herself for her father; Judit, in a different way, for her son). Cruz and Molina are fabulous. Visually, the director is working with a new cinematographer, Rodrigo Prieto; it’s a departure (grainier, darker, less glossy than his work with José Luis Alcaine) and a potentially fruitful one for future development. However, the film lacks discipline in paring the unnecessary, and Almodóvar, with his insistence on forcing the characters to say, say again and say some more, seems to have lost sight of dramatising and showing. After his recent run of films (All about My Mother and 2002’s Talk to Her, at least, are masterpieces), anything less than great would be considered a disappointment. But as failures go, Broken Embraces is a great one. * Jose Arroyo 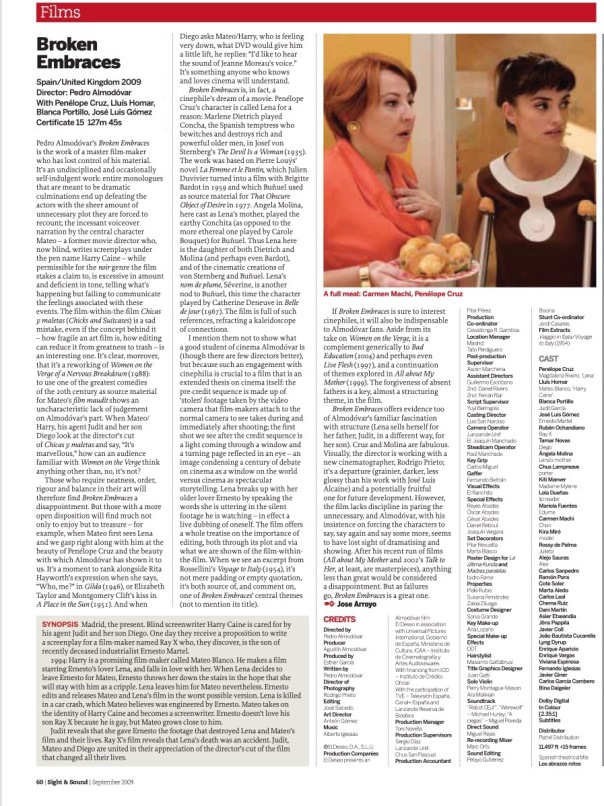