I’ve only just discovered Camera Over Hollywood: Photographs by John Swope 1936-1938, and a discovery it is. John Swope was a life-long friend of Henry Fonda, James Stewart and Josh Logan. They all met in their early twenties when they were part of the University Players theatre troupe in West Falmouth, Cape Code, Massachussetts; and they all found success: Josh Logan as a legendary writer and director  in post-war Broadway (and a rather mediocre film director); Swope as a photographer and regular contributor to LIFE magazine; Fonda and Stewart need no introduction.

The book shows us photographs of Hollywood at work (extras waiting on sets, cinematographer James Wong Howe behind the camera, the building of entire cities on the lot) and at play (James Stewart on dates with Olivia de Havilland and Norma Shearer); in front of the camera (Anne Rutherford posing with her dog) and off-stage (Rosalind Russell reading the script for The Citadel in bed; Charles Boyer in his dressing room).

Swope had unparalleled access to the studios, not only through his friendships with Fonda, Stewart and Logan but also via his enduring marriage to Dorothy McGuire as well as his own considerable credentials as a photographer and theatrical producer. And he doesn’t just show us the insides of the studios. I was particularly interested in his documenting of film-going, the continued emphasis on sex (see two images below), and the changes in the fortunes of particular stars that narratives of their careers signal but don’t  well convey. 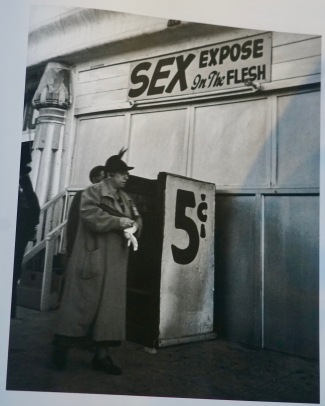 In the image above, note how the cinema’s main feature is Stage Door but how they’re also showing Ellis Island and a Mickey Mouse cartoon as part of the bill. Note also how over the box office Ginger Rogers and Katharine Hepburn are both billed above the title, though Hepburn’s name is misspelled. In the film print I saw Hepburn was billed first, probably a contractual obligation. But the manager of this particular theatre clearly thought Rogers was more of a draw in 1937. Moreover, if you look closely at the lobby cards and posters roughly pasted together between the two men, you’ll note that Ginger Rogers gets much bigger billing and that Hepburn and Adolf Menjou —  immediately underneath her name —  are barely discernible. A much clearer sign of the descent of Hepburn’s stardom with the filmgoing audience, in what is historically seen as one of her few hits of this period, and before she is officially designated box office poison, than any account I’ve ever read.

It’s a marvellous book of insightful photographs at a key period in Hollywood’s history. The introduction is by Dennis Hopper who credits Swope with getting him into pictures,