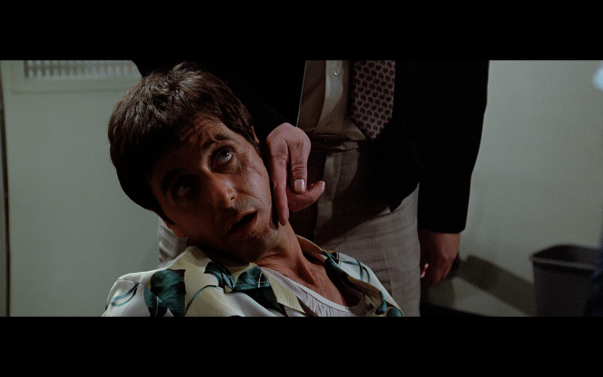 Brian De Palma’s Scarface was released in December 1983. I was then an undergraduate at McGill trying to earn a few bucks during the holiday season by working as an usher at the Place du Canada cinema in Montreal, an 815 seater with one screen that opened in ’67 with Expo and closed in 1989, after the multiplex boom made such theatres impractical.

I got fired eventually, ostensibly for reading on the job but really because the holiday season was over. Scarface was Universal Pictures’ big Christmas release that season. During the whole time I worked at Cinema Place du Canada, which must have been just over a month, it was the only film we screened, and we could only show it twice weekdays as the film was so long (2h50). Despite mixed reviews, we got good crowds, and queues were common at almost every screening.

I have many fond memories of working there; the sound of kernels of corn popping steadily away, the smell of the newly melted butter. I thought that’s the way all cinemas all over the world made their popcorn until I moved to England. Here I found the popcorn on sale popped who knows when, looking forlorn and strewn behind big glass windows, usually sweet instead of salty. Why is that? It’s so inexpensive to pop corn fresh and the melting butter makes the whole cinema smell enticing and delicious. What an alienating way to cut corners, especially at the prices they charge.

I’ve never forgotten the way guys with their dates leaned up to the box-office and said ‘Two for Al’ at the Place du Canada cinema screenings of Scarface. It was almost always ‘Two for Al’ instead of ‘Two for Scarface.’ That’s how big a star Al Pacino was then. If the guys were Italian, they’d purr a ‘Hey’ up front with that extra relish, musicality and élan so typical of East Coast North Americans of Italian descent wanting to present ‘la bella figura’ and taking particular pride in Al Pacino’s accomplishments: ‘Hey! Two for Al’. Remember John Travolta aspiring to Al-ness in Saturday Night Fever?

Pacino then was every immigrant’s Al. That Scarface has since found a central place in hip hop culture in particular and black cultures in general is no surprise. One can point to how the cocaine, the guns and the gold might have a particular appeal to hip hop ‘pimp’ culture. But of greater significance in Scarface is how it presents the gangsterism of the system itself, the lawlessness of the cops, the muderousness of the privileged and the constant exclusionary practices put in place against any kind of other. Scarface spoke — sang really — not only in operatic style but with operatic range and depth to immigrants and outsiders of all kinds.

At Place du Canada I wore a tux; a cheap, scratchy and ill-fitting one, which probably made me uncomfortable wearing any kind of suit for life. I repetitively took and tore up tickets. I had a flashlight and sometimes lit the way and led the last stragglers to their seats.

But hey, there wasn’t much to do, which meant I was already in place in the dark to delight in the audience’s reaction to the chainsaw scene in the shower, probably the most graphic and violent bit of cinema your average filmgoer had seen to then — the not so average had probably already revelled in Texas Chainsaw Massacre (Tobe Hooper, 1974) — and one which has surely shaped my taste.

I also got to see the rest of the film, over and over again, maybe 70 times in all, which surely also shaped the way I understand and think about cinema now. In between shows, I was reading Pauline Kael in short bursts, which I imagine must also share some of the blame, and not just for getting me fired.

There will be more on De Palma’s Scarface in later posts.