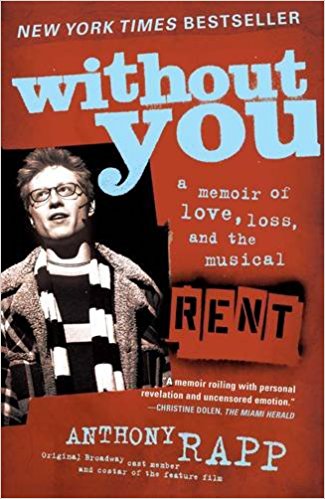 I didn’t know Anthony Rapp had written a memoir until a friend recommended it to me the other day, for which I’m grateful. I was interested in reading it because I wanted to know what kind of man it was that broke the Kevin Spacey story. It turns out he’s the kind of actor for whom it was important to be out quite early on (from when he was a teenager to his mother; and from the early nineties, when he was in his early twenties, to the world at large) and who somewhat made his career out of being so: until, possibly, the new Star Trek: Discovery, Rent remains what he’s best known for.

Much of the book is concerned with family acceptance, with community service in New York, with trying to do the right thing whilst his Mom is dying of cancer and he’s enjoying his biggest triumph on Broadway in Rent. The AIDS crisis which is the subject of Rent is layered onto the cancer his mother is dying from; art illuminating and helping make life and its loss bearable. The bohemians of the musical, and the busy and glamorous life he’s leading in New York always put in tension with what’s happening back home in Illinois. His attempts to find love and not be alone is also played against the very large and relatively oppressive extended family which nonetheless is present to varying degrees in order to help and to ritualise important moments.

Reading the book, one can see why there might be a soupçon of ressentiment from an actor who takes all the risks of being out during the height of the AIDS crisis (Rapp goes right from an AIDS memorial service to his audition for Rent) to one who arguably, by not being so, went on to greater and greater fame. Rapp recounts an anecdote of going out with an actor and breaking up with him because he wouldn’t accompany him on the red carpet thus marking himself as a ‘gay partner’ due to his career.

An interesting and illuminating theatrical memoir from a sincere, sensitive and well-intentioned person that, as is expected of anyone whose star gets a chance to shine in the Great White Way,  is somewhat self-absorbed and self-indulgent and relatively unfocussed on any subject that isn’t himself. I’m very glad to have read it.

4 thoughts on “Anthony Rapp’s Without You: A Memoir of Love, Loss and the Musical Rent”