A dense and rich political film with extraordinary mise-en-scène that begins with an open letter to the Egyptian people and ends with Nasser informing Egypt of the loss of the Six Day War with Israel and announcing his resignation as the people take to the streets. The Sparrow is perhaps the least pleasurable of his films to watch but very rewarding indeed. The more we talked about it and the more we read, the richer the film becomes. The podcast can be listened to below:

I made an ad announcing the podcast earlier in the week. I want to keep it here for the obvious homoeroticism it displays:

but one which rhymes on another level this clip below:

In the podcast we discuss this extraordinary scene with the women guerillas and the extraordinary editing that ends the sequence:

We also discuss at length the boy’s attempts to get to the holy shrine, the picaresque hero always cheated, lied to; weak, powerless, and yet determined to go on to his destination. He symbolises the little sparrow in the film, Egypt’s youth, and the future

We discuss the use of zooms in the film, and as you can see below, the edit on the rythm of the zoom itself, whilst also exemplifying Chahine’s way of often placing a figure in a crowd.

One detects a more Sirkian turn in the mise-en-scène, frames within frames, the screen broken up into different partitions compositionally but also bringing in different degrees of depth into play, all of this within the conveyance and critique of a nostalgia for English Colonialism.

We discuss this dream sequence that echoes an earlier critique of the male gaze as a violation.

An finally, the extraordinary last sequence with Nasser handing resigning over the loss of the Six Day War.

Nasser’s resignation rhymes with the Open Letter from Youssef Chahine to his audience that reads as follows:

On the streets of Cairo, Algiers, Tunis, and Baghdad and all Arab capitals young people stope me and ask, “tell us, Youssef, what really happened in June 1967? How did we end up with such a defeat, and why? We thought that we were ready to fight.” All these sincere and courageous people, these sparrows that I love, did not hesitate to flock into the streets in June 1967 to express their readiness to take on the new challenge….To all these people, today we try, through The Sparrow, to illuminate a few of the national and international elements why they, without their knowledge, became victims to”.

People may also want to take a closer look at this image capture for a closer look at mise-en-scène (the use of space, mirrors, the filming from inside, and many other stylistic characteristics we’ve been discussing in the podcasts to now) but also for the way they illuminate thematic issues: 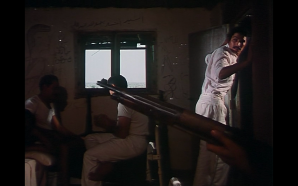 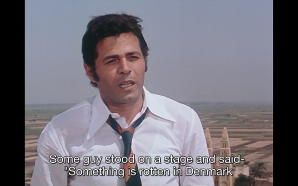 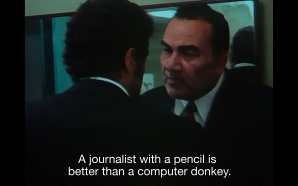 Aside from the books mentioned in the podcast, readers may also find the following interesting, courtesy of Richard Layne:

This one is also good. It was available on Filmstruck
http://internationalcinemareview.blogspot.com/2017/04/youssef-chahine-al-asour-sparrow.html
Barbican listing from a screening in 2017