Marie Octobre is now the name of Marie-Helène Dumoulin´s coutoure house. But it was once her code name in the French resistance. This evening she´s organised a get-together with all her former in colleagues the resistance group to commemorate the 15th anniversary of the death of their former leader, Castille,; killed when the Gestapo instigated a raid in the very room they are now reminiscing in. But was it a random raid or did someone turn them in? 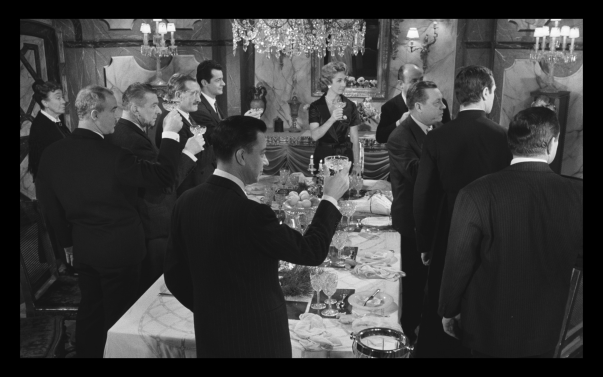 The film feels like a theatrical adaptation of the last segment of an Agatha Christie mystery, where everyone gathers in the drawing room and each is questioned about their whereabouts, alibis, motivations etc. Like an Agatha Christie adaptation, it´s got an all star cast: Danielle Darrieux, Bernard Blier, Paul Meurisse, Serge Reggianni, Lino Ventura. Each star is given their moment to shine, and all are excellent, with Regianni standing out not only for his emoting but for his charm (and to do credit to the others, apart from Darrieux, Regianni has the best role).

To be fair, Marie-Octobre is thematically richer than the average Christie: What was collaboration with the Germans? Is it an absolute or were there degrees? How much choice did people have? Who behaved ethically and who didn´t? What is the intersection of individual and collective choice and action? Does any of this matter 15 years after the fact when even the statute of limitations has lapsed?   It´s an address-the-nation exercise in historical remembering with practically all the sections of society represented (the maid, the butcher, the doctor, the priest, the tax inspector, the printer, the plumber, etc.) 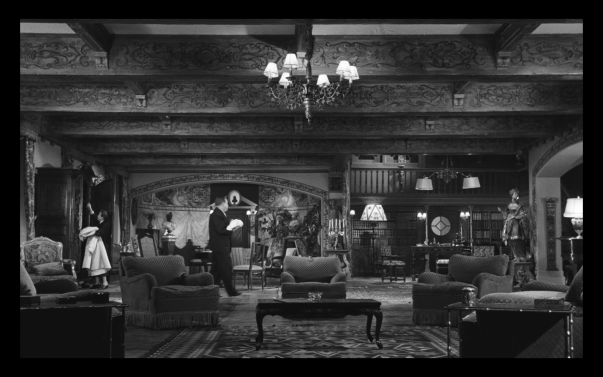 Except for a few exterior shots at the beginning and end Marie-Octobre takes place all in one room. Duvivier shot chronologically, which certainly seems to have paid off with the actors, and keeps the whole thing moving well: it never feels static. Though it never looks particularly great either: Duvivier conscious of movement and rhyme but not really making the most of framing and composition in widescreen (1.66). One need only compare this to one of Hitchcock´s formal exercises to see how Duvivier here falls short. It´s a piece that works well —  it´s never boring — but that one can imagine working even better on stage, rather damning for a film.

Sometimes I think the French New Wave ruined a whole history of French Cinema for subsequent generations with their condemnations of ‘quality cinema’, ´white telephone films´and ´cinema de papa´. Oops, to the critical dustbin go the marvellous Gremillons and Carnés and Duviviers and films by other great filmmakers of the 30s, 40s and 50s. And for several generations. 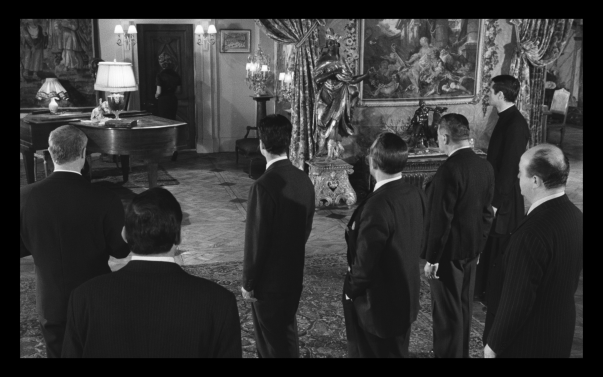 But then one sees a film like Marie-Octobre and one understands. It´s stagey, lacks poetry, lacks depth, compositions and lighting are proficient conveying a sense threat and of things being off-kilter….but at a price (see how inelegant the compositions are in practically all the image-capture that illustrates this piece) . I know that Duvivier fans esteem this one highly, probably for its theme and the clever way the screenplay keeps one guessing. But as film art, it doesn´t add up to very much. If this is what the new wave directors were watching, then their position is very understandable indeed. But is this all they were watching. Did they not see Panique, La Belle Equipe, Pepe le Moko, La Bandera et? 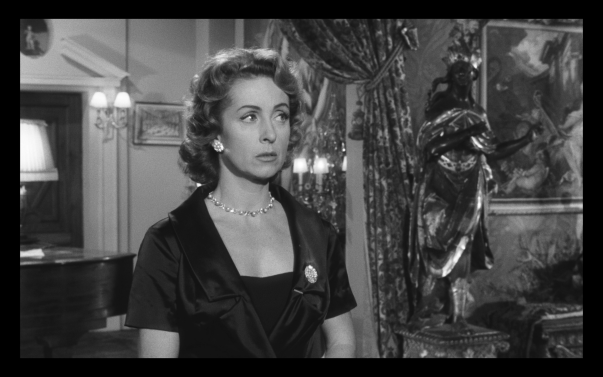 It is worth mentioning that Lino Ventura plays to his persona as a former wrestler, which he was before he took up acting. and worth noting also that Lucien Marinvale, the  butcher played by Paul Frankeur, keeps being glued throughout the narrative to a wrestling match taking place on screen, a commentary on what´s taking place in the drawing room as well as a domment on a society that seeks forgetting in spectacle. Perhaps it´s no surprise that Wrestling was something Roland Barthes felt compelled to write on.

Marie-Octobre is one of the Collection Fondation Jerome Seydoux releases by Pathé, with English sub-titles, a lovely shiny print with rich blacks..