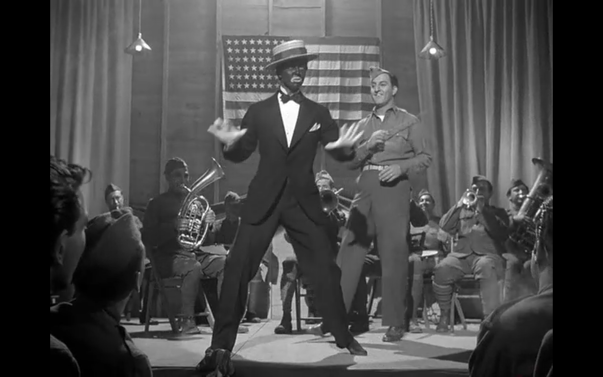 I always get sad and embarrassed when I see the great stars of the Hollywood musical don blackface, even when, as Fred Astaire does in Swing Time, it’s done as an homage to a black performer, Bill ‘Bojangles’ Robinson. I thought Doris Day might have escaped this blight merely by becoming a star a generation later than Astaire or Garland or so many others. But no, here she is in I’ll See You In My Dreams .(Curtiz, 1951) .and one feels ‘poor everybody’.

The image and the number condenses a concatenation of meanings that evoke both the push and pull, the inclusiveness and hierarchisation of American identity. The number is set in a WW1 camp where Gus and Grace Kahn are entertaining the troops. The film makes much of Kahn’s family having emigrated to America and of Kahn writing the songbook to the lives of several generations of Americans (‘Making Whoopee’, ‘Ain’t We Got Fun’, ‘My Buddy’, ‘It Had To Be You’, ‘My Baby Just Cares for Me’ etc). The film in a way charts a journey of assimilation and inclusiveness. Danny Thomas, gives a great performance as Gus: wide-eyed, wide-open emotionally, overly focussed to the point of autism, very endearing in expressing love of wife and children the character he plays can’t express except through song. Danny Thomas himself was famously of Lebanese origin. So Danny, Danny as Gus, Doris, Doris as Grace, Grace married to Gus, her blondness, his darkness, all speak assimilation and inclusiveness.

Except we have this number, which in spite of the flag and in spite of narrative speaks a hierarchy of exclusions. Doris is not just donning blackface. She’s donning blackface (and drag!) to imitate Al Jolson singing ‘Toot Toot Tootsie Goodbye’, so a blond female Kapplehoff, Day’s real name, is summoning and superseding a male jew, Al Jolson (Asa Yoelson), who himself poked fun, embodied, reproduced and made himself superior to a derogatory stereotype of a black man.

So the image speaks of Doris Day (Doris Ma Anne Kapplehoff) and Danny Thomas (born Amos Muzyad Yakhoob Kairouz) coming together under a flag, just like the characters they play, speaks of assimilation and inclusiveness. But the blackface itself belts out the limits to that inclusiveness, a hierarchy of race and ethnicity, a hierarchy of power which is both gendered and racialised, differential access to belonging and a colour barrier to inclusiveness tout court.